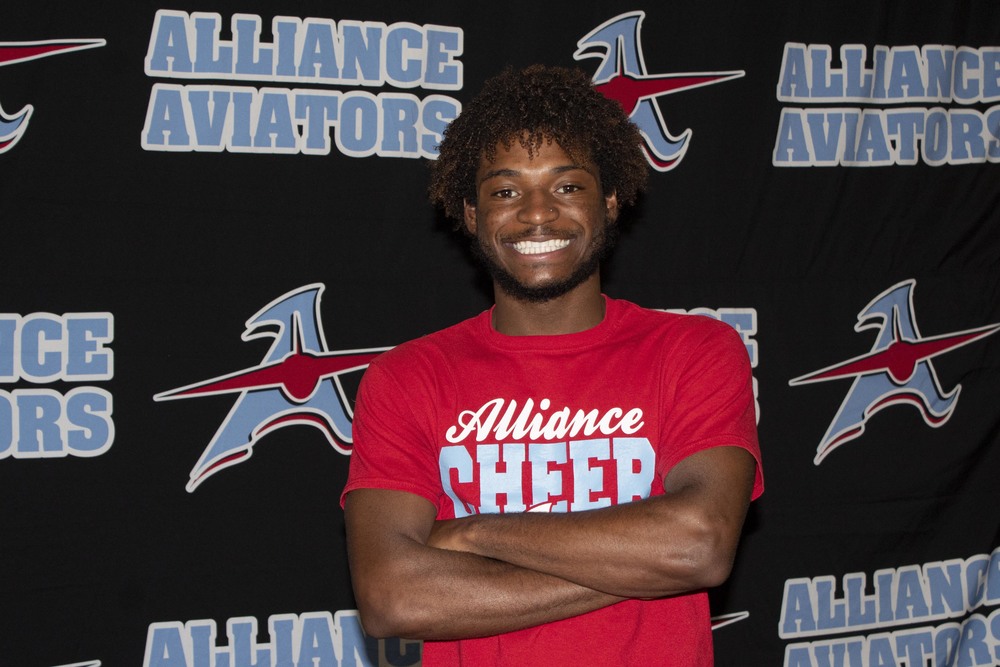 After watching Netflix’s hit show “Cheer,” and then binging it a number of times during the statewide quarantine in the spring, Khairee Mitchell knew he wanted to attend Navarro College in Corsicana, Texas to be a part of their elite cheer program.

Mitchell, a senior at Alliance High School, is getting his chance to attend his dream school and continue with the sport he fell in love with at a young age. He first learned about Navarro after seeing some of their viral videos on youtube, but when they got their own Netflix show, that was when he really started thinking about trying out for the program.

After learning the Navarro cheer team was holding an invite only clinic, he jumped on the chance to attend. He had to submit a video showing his skills and hoped to be invited. He was nervous when he didn’t hear anything back for a while, but after some time, he received an invite to the one-day clinic. There were a total of 18 people invited to the clinic that day.

For the week leading up to the clinic, Mitchell practiced and practiced to make sure he could nail every one of his flips and stunts during the clinic. His former AHS cheerleading coach, Jaclyn Mothersbaugh, pushed him hard that week to ensure he was ready for all the clinic would entail. Mothersbaugh has been his biggest influence and supporter during this time. She has pushed him and encouraged him to do his best.

The actual clinic only lasted a couple of hours. Once Mitchell was there and started seeing the other athletes, he wasn’t sure if he would make the team.

“Honestly, after seeing all the people there, I didn’t really think that I would make it,” Mitchell said. “Tumbling wise, I definitely could keep up with all the guys and girls, but coed stunting is not my strong suit. Apparently I did good enough to where I got invited.”

During the clinic, him and the others were asked to showcase their tumbling and stunting skills. After landing a coed stunt, which consisted of him and one other athlete, that was when Monica Aldama, the head cheerleading coach for Navarro, approached him.

Mitchell was surprised when Aldama came up to him. She asked him to complete a series of tumbling skills. After he had completed the tasks, she asked if he would be willing to sign and he didn’t hesitate to say “Yes!”

“At first it didn’t really process,” Mitchell said. “I was like, wait did the Monica Aldama really just ask me to sign to her cheerleading team? After that, I was just super excited. I was basically like over the moon ecstatic, couldn’t stop smiling. All the other athletes around me that are already on the team are hyping me up and giving me high fives and fist bumps. It was probably one of the best feelings in the world.”

Only five or six other people were asked to sign that day. While Mitchell has made the team, he has not made mat just yet. Mat is the squad that takes part in the competitions shown and documented in the Netflix series. However, he will be a part of the team that cheers at games, pep rallies and other performances.

“The show [“Cheer”] taught me that as long as you're putting your best foot forward and giving a hundred and ten percent, then you don’t have anything to worry about,” He said.

Mitchell’s family was so excited for him when he told them the news, but none were as excited as he was to hear he had been accepted to the program. Originally from Texas, Mitchell will attend Navarro College just an hour and a half away from where he grew up and where some of his family still resides. He and his family moved to Alliance when Mitchell was in eighth grade. His mother wanted to move closer to her hometown of Canton.

Growing up, Mitchell enjoyed tumbling and learning new tricks. He taught himself most of his tumbling skills at a young age and wasn’t formally trained until he started cheering. His real training didn’t start until his freshman year at AHS. Mitchell actually played football when he was younger and still lived in Texas. He would tumble on the sidelines during practice and one day his football coach approached him and asked if he would be interested in cheering. His girlfriend was the cheerleading coach. He got Mitchell in touch with her and that is when he started cheering.

When he came to Alliance, he joined the cheer team and continued to work hard. He even helped the competition cheer team win first place in the EBC last year.

Mitchell wants all other male cheerleaders to know that it is worth it to be on the team. There will be things said, but the feeling of performing and succeeding is worth it.

“It’s hard. It’s real hard, especially because this is a mainly female dominated sport,” Mitchell said. “But keep your head high, there’s going to be something said, but I think it’s just jealousy. Name five other boys you know that can flip like me.”

He also had some words of advice for all cheerleaders, both male and female.

Along with cheering, Mitchell has been a part of the Jetsetters for the last few years, where his tumbling skills have come in handy. He is also a member of the AHS orchestra.

All of us at ACS want to wish Khairee the best of luck as he takes on college and being a member of the elite Navarro Cheer Team!