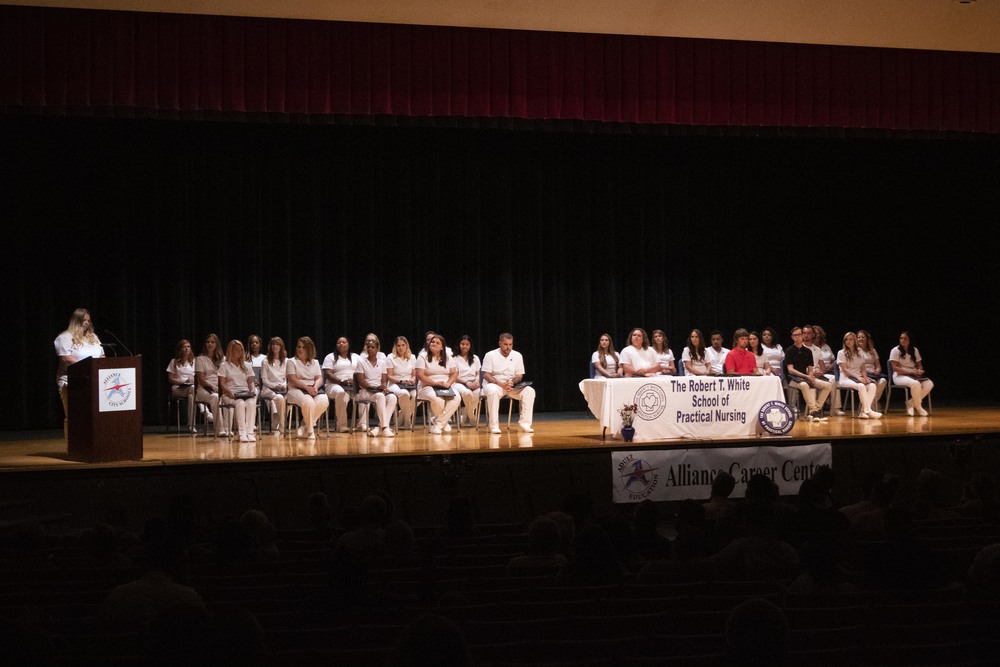 The Alliance Career Center recently graduated students from the Robert T. White School of Practical Nursing and from the welding program during a ceremony at Alliance High School.

Not only have the students excelled in their respective programs, but they have done so amidst a global pandemic. Students took part in digital and in-person learning in order to receive their full number of hours to graduate on time.

The first to be recognized were the two graduates from the welding program, Ryan Brooks and Dustin Campbell. Michael Mariana, the welding instructor, congratulated the students and presented them with their certificates.

“We had some struggles with COVID, but our two students did an amazing job. Great attendance, they both have jobs a month out of graduation and they are currently both working now,” Mariana said.

The welding students have already been employed at local businesses. Brooks was hired as a welder at MAC Trailer Waste Division and Campbell is working as a welder at Trialstar.

Two practical nursing classes graduated, including a part-time and a full-time class. During the traditional ceremony, each graduate received a certificate and their pin.

“We’re very proud of all these students and all they’ve accomplished,” Bonnie Newton, Director of RTW said.

During the ceremony, a number of individual awards were presented to students. For the part-time nursing class, Allie Nichols was named the Valedictorian and received the Perfect Attendance awards. Allison Brendlinger was named the Salutatorian. Jane Moncrief Spirit of Nursing award and the Outstanding Achievement award were given to Jacqueline Berry and Shawna Myers respectively.

Beckwith provided the remarks on behalf of the graduates.

“I know, personally, when I started in August 2020, it felt like there was no light at the end of the tunnel. Graduation seemed so out of sight. Yet, here we are. We made it to the end of the tunnel,” Beckwith said. “I think it says something about every single one of you graduates today. That we have been so resilient and we have conquered nursing school through a global pandemic, which has affected each one of us during this program.”

The next step for the students in completing the National Council Licensure Examination for Practical Nursing (NCLEX-PN).

An adult education open house is scheduled for Tuesday, Aug. 3 from 5-7 pm. Stop by to learn about the programs, meet the instructors and learn about the financial aid available.

“We look forward to welcoming our surrounding community members to the Alliance Career Center where they can experience our programs and labs first-hand, see what our students have been doing all year and learn how they can become a graduate themselves in less than a year, with possibly little to no debt,” said Beth Starrett, director of ACC.

The Alliance Career Center is currently enrolling for a number of programs that will start in the fall. If you are interested in learning more about the adult education programs offered, check out www.accrtw.org or call 330-829-2267.