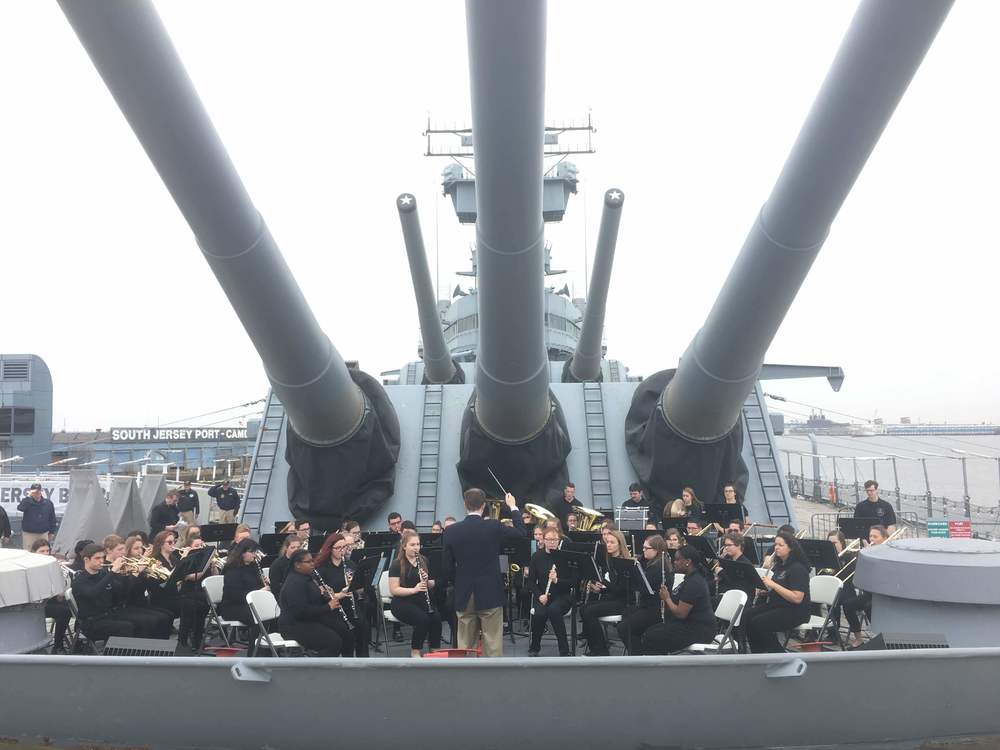 The Alliance High Music Department traveled to Philadelphia and New York City over spring break, performing in unique locations and exploring some of the country’s most popular sightseeing cities in an unforgettable trip.

Students in orchestra, band, concert choir, Jetsetters and Choralaires made the four-day trip from March 25 through early morning on March 29.

The first stop in Philadelphia was dinner at Maggiano’s Little Italy, giving students a full taste of Italian cuisine. Before the night ended, everyone gazed down on the nighttime lights of the city from the One Liberty Observation Deck.

The second day began with a tour of historic buildings in the nation’s first capital, including Independence Hall, the Liberty Bell and a working printing press shop. Guided by a historical reenactor, it was easy to see why it is considered “the most historic mile in America.”

“I really enjoyed all aspects of the Philly and New York trip, but my absolute favorite part was taking the guided tour throughout Philadelphia,” said Mia Holt-Hoskins, a junior. “I’m the biggest ‘Hamilton’ fan ever, so being able to be somewhere that part of the musical took place was truly amazing.”

After the walking tour, students ate lunch at Reading Terminal Market, a diverse market with foods and goods from many different regions and ethnic groups.

The group then crossed over into New Jersey, and the band performed patriotic pieces on the deck of the USS New Jersey, one of the most decorated American battleships of all time. Despite some rain, the tour provided an in-depth look at the workings of a military ship that served with distinction in World War II, Korea, Vietnam and the Middle East.

The second day concluded with dinner at the Hard Rock Cafe, where students enjoyed their meals while old and new rock anthems blasted in the background.

On the third day, AHS bid farewell to the City of Brotherly Love and rode on to Valley Forge, the winter camp of the Continental Army during the Revolutionary War. After a history lesson on the importance of this location to George Washington and his forces, it was time to drive again.

Exploration of the Big Apple began that evening with a trip up to the top of the Rockefeller Center, where iconic structures from the Empire State Building to the Statue of Liberty could be seen. As the sun began to set, the travelers dug into a meal at Mama Sbarro’s, then headed out to see the bright lights of Times Square after dark.

The fourth and final day began with major rush hour traffic on the New York-New Jersey border, causing performance times for the orchestra and choir to be delayed. But despite the crowded highway, both ensembles were able to perform their pieces in the beautiful St. Malachy Roman Catholic Church, nicknamed The Actors’ Chapel because of its location near the Broadway theater district.

To continue the musical theme of the day, students ate lunch at Ellen’s Stardust Diner, a unique restaurant where aspiring Broadway actors simultaneously bus tables and sing, hoping to find a place on one of the many stages across the city.

The sprawling metropolis of New York City holds many famed locations, and after lunch students took a guided tour with an experienced local to see as many as possible within a few hours. From the green oasis of Central Park to the masses of people in Grand Central Terminal, the group began to understand the vastness of America’s largest city.

The afternoon brought the group back to Times Square, this time for a few hours. Shopping and exploring one of the world’s most visited districts was one of students’ favorite destinations.

“I really enjoyed walking through Time Square with some of my best friends,” said Holt-Hoskins.

After a quick dinner at Dallas BBQ, it was off to the final event: the hit musical “Wicked” at the Gershwin Theatre. “Wicked” tells the story of the Wicked Witch of the West, also known as Elphaba - long before Dorothy comes to Oz - and of her oil-and-water friendship with Glinda the Good.

After an overnight drive, the travelers arrived back at the high school the next morning.

Despite spending much of the trip surrounded by millions of strangers, the moments with friends are some that stand out the most to students.

“The New York trip was a really fun way to learn new things about music and our history as a country with the historical sights we were able to tour,” said Matthew Eversdyke, a sophomore. “I was able to enjoy the experience with my friends, and that made it extra special.”

“It was very exciting and liberating to experience something as amazing as Philadelphia and New York alongside some of my best friends. I made memories that I will cherish forever,” said sophomore Khairee Mitchell.

“I thoroughly enjoyed all parts of the New York trip,” said sophomore Kemarie Evans. “From performing on a battleship with the band to being 700 feet in the air, the trip is one I will never forget.”

A Tweet by band director Shaun Fontaine seemed to sum it up:

“We finished our trip with Wicked (AMAZING)! I’m exhausted.Yes, it’s from lack of sleep, stress, bus rides, and homesickness, but mostly I’m exhausted because I had SO MUCH FUN. Thanks students, staff, admin, and parent chaperones for a great trip.”